Breaking and Entering: A career change to the Tech industry

One night I was doom scrolling on my phone and found this post: 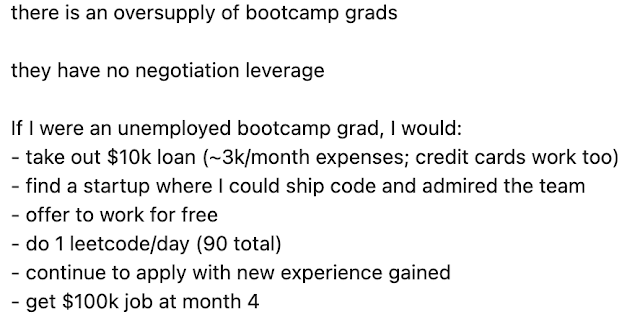 After reading that post, I was mad, defensive, and had no idea where to start on a rant. I conceit there are more boot camp grads in the job market. Course Report shows an increase of graduates almost every year since 2013. Way to under-perform 2018, your parents are disappointed in you. Can't you be more like your sister, 2016? Boot camps have been private institutions daring universities to create their programs to keep up. Whether in-person, online, or self-paced, coding boot camps have lowered the bar of entry for education, allowing many to start coding and pursue tech jobs. All this without applying to a highly competitive four-year university few people can afford and becoming eternally indebted.

In that respect, I think boot camps are great! Why should an industry with some of the highest paying jobs be comprised solely of people with the financial means to afford prestigious educations? Understanding how to code is important as so much of the world will be moved and touched by technology. I think the importance of learning to code is on par with high schools having Woodshop, Home Economics, and Automotive Repair. These are not just job skills but practical life skills. We should be taught how to swing a hammer and make a birdhouse, create a budget and cook for ourselves, change a car's oil, and make an ugly static website. The birdhouse and meal can be ugly too. Learning these skills isn't about mastery but in understanding practical elements of our world.

Now let's consider the next point: boot camp grads have no leverage. Why not? It looks like the average boot camp student is a career changer. You're telling me that there are no crossover skills from any other industry that would make someone suitable for tech? What coding boot camp grads have to offer does not start with our first day of coding. Granted, my ability to stand in front of a hot stove for 8+ hours a day did not directly impact my ability to build a React app. However, years of management experience and just working in the Hospitality Industry gave me soft skills that don't get covered in coding boot camps. That is to say, don't sell coding boot camp grads short. We have value in the entirety of our working and educational experience. Lest we forget, programming is about problem-solving. Every work opportunity you have to solve problems has built up your aptitude for programming.

In my cooking career, I was "self-taught." I didn't go to Culinary School and learn basic French techniques. So early on, when I went looking for cooking jobs, I struggled. Even though I had been a Lead Line Cook and gotten some management experience, I heard that my lack of Culinary School education made me ineligible for a job. To those jobs, after pouting alone with no one watching, I would say, "well, then I don't want to work for you anyway."

My hospitality experience gives me people skills both in customer-facing and team situations. Has anyone ever told you there's no stress or pressure in the Hospitality Industry? They're liars! It's constant triage with a smile on your face in tight quarters with everyone trying to get your attention. Anyone with customer-facing experience has an advantage over a new college graduate with no work experience because they have shown that they can work with people. Last I checked, either your customers or your team has people on it.

Take out a loan for living expenses

To attend a coding boot camp, you have to pay tuition. There are Income Share Agreements (ISA) at some schools that allow you to defer payment until you find a job utilizing the skills you acquired. I think ISAs are a demonstration of faith in the curriculum and students. ISAs are also an alternative for graduates as the median salary increase for boot camp grads is 56%, according to Course Report. However, many take out loans.

So long as you have a good credit history, you're in good shape. That means the ability to start a bank account and to get a credit card to build up their credit history. Those pieces are easier to access if you live a privileged life. And now it's a problem of socio-economic status (SES). Affluent populations will have a lower perceived risk when following the "take out a loan" advice. These populations have more credit history and are more likely to have alternative resources to fall back on. However, this narrative discourages people with lower incomes from even applying as the perceived risk is higher than their counterparts with higher SES.

"Stage," said to rhyme with "lodge"

So why not just find a Startup you respect and offer to work for free? Let me compare with something in the Restaurant Industry. Many fellow budding chefs would stage (say it to rhyme with "lodge," it's French) at restaurants they yearned to work for or open a place just like it. These were typically institutions that stood for years and represented something important in the Restaurant Industry. A stage (En français s'il vous plaît) is when you work for free to get the experience and put it on your resume.

Not everyone cares if you've staged unless it's a place they also respect. If you work for a startup that no one has heard of or has a bad reputation, then you may not get the attention you want. At least that's what I'd overhear some Restaurant Managers and Chefs mentioning behind closed doors or over after-shift drinks. I'd heard a chef say they wouldn't hire someone who staged at a kitchen because they thought their housemade pasta was weak. In this case, maybe being ignored is better than being looked down on.

Some restaurants take advantage of the free labor. The stage sometimes works longer hours doing dirtier, less glamorous work without recognition. More work with less learned. If you're going to get any value from working for free, you need to make sure you're working on projects and working with people that add to your skillset. So if you go this route, advocate for yourself and find the people at the company willing to help you. Now, if those people don't exist where you're staging, I'd suggest finding a different company.

$100k: But you gotta know the territory 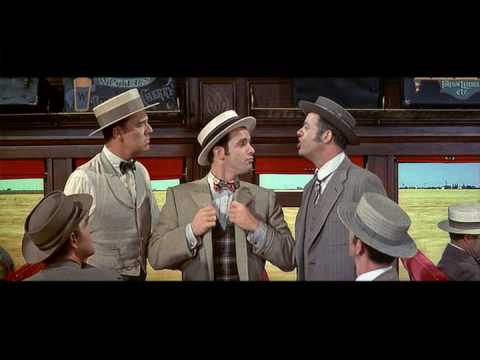 A $100+k salary as a boot camp grad is aspirational. Having that number as a carrot to dangle in front of you can be pretty motivating. However, it's not responsible to expect that pay after three months of working experience without a caveat. You've got to know what the average pay rate in your area is. Or, maybe in this remote-working world we're more accustomed to now, the average pay rate in the area for the business that you're applying.

Market value is different depending on where you live. The San Francisco average Software Engineer salary is $122k, according to payscale.com. In Kansas City, MO, the average is $71k. The "advice" that spurred this post comes from a developer living in Austin, TX ($87K avg salary). Same job title, three different cities, and three different rates. I am near San Francisco and interviewed with companies based out of Kansas City and Chicago. Like a fool, I didn't look at the market rate in any of the companies' cities. One recruited I talked to had an immovable deadpan look on their face. The only way I could get them to lose the poker face was when they heard my expected salary.

Boot Camp grads, don't be discouraged. There are plenty of developer and engineering jobs out there. There are even plenty of tech jobs that aren't just coding. Take the extra time to figure out what kind of job and company you want to work for and focus your efforts toward getting into a job like that. You went to a coding boot camp because you decided to steer in a different direction. Now is not the time to cruise and let the wind take you. It's the time to keep making decisions about where you will put your new skills and passions.